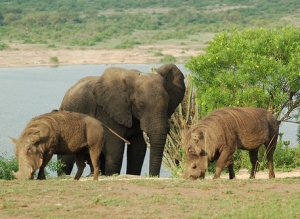 Kasese: Local leaders adjacent to the Queen Elizabeth Conservation Area have asked the government to expedite the process of instituting the Wildlife Compensation Verification Committee so that the claims of those whose property including crop gardens were destroyed by wild animals are settled.

The committee was supposed to have been put in place immediately after the bill was assented to by the President Yoweri Kaguta Museveni. The Uganda Wildlife Act seeks to provide for compensation for loss of life and property caused by the wild animals escaping from wildlife protected areas.

The animals listed under the fourth Schedule of the law include elephants, lions, leopards, crocodiles, buffaloes, hyenas, hippopotamus, gorillas and Chimpanzees.

However, the Committee which shall have a community member on the board has not been instituted since the Act was assented to by the president in September last year.

Other committee members include the Chief Government Valuer, Attorney General, and representative of the Ministry in-charge of Wildlife all in consultation from the Board of Trustees.

Now, the local leaders say that the affected persons in their respective areas and their legal representatives have failed to submit their claims since the committee which is supposed to verify a claim and later submit it to the board of Uganda Wildlife Authority with its recommendation is not yet in place.

According to the Act, the board is then supposed to review the claim and if approved, then award compensation according to the market rates but all these are not done because the Wildlife Compensation Verification Committee.

Ezra Turyahebwa, the sub county chairperson for Karusandara said that the government should hurriedly institute the committee because wild beast have escaped from their habitat and raid peoples’ crop gardens.

Mr. Turyahebwa together with his fellow chairpersons had gathered at Uganda Wildlife Research and Training Institute in Katwe Kabatoro Town Council to witness the official launch of a project aimed at strengthening human-Elephant Conflict in the Northern Sector of Queen Elizabeth Conservation Area.

The project which will be implemented by Uganda Wildlife Research and Training Institute in partnership with Uganda Wildlife Authority- UWA will recruit ten wild scouts from each benefiting sub county and they will be equipped with technical skills to stop the wild beasts from invading peoples’ crop gardens.

The multi-million project is funded by United Nations Expanded Programme through the African Elephant Fund and will be implemented in the six neighboring sub counties adjacent to the Queen Elizabeth National Park including Isango, Nyakiyumbu, Munkunyu, Lake Katwe, Kahokya, Muhokya and Karusandara.

Patrick Bushendich, the Legal Officer UWA in-charge of Queen Elizabeth Conservation Area told the leaders that the wild scouts should talk to the affected families that their cries would be no more as the government institutes the committee.

“The delay to institute a Wildlife Compensation Verification Committee is attributed to Covid-19 pandemic that has placed the world upside down”, said Bushendich.

Bushendich encourages the leaders to ensure that the ten wild scouts from each sub county who will subsequently be trained and equipped with technical skills of managing stray elephants, installing beehives and chili growing in critical porous areas help the farmers to know how to make a claim.

He also said that they are charged with the role of stopping the elephants from escaping into the farmers’ crop gardens.

Nicolas Muhesi, the Project Coordinator, said they decided to initiate the programme after realizing that there are many problem animal incursions due to population increase in the districts surrounding the Queen Elizabeth National park.

Each Scout after being trained for a week will be given a gumboot, Smartphone, an Overall, chili and would encourage the farmers to plant chili around their farms because elephants do not like chili smell and taste. “Send us disciplined people, don’t recommend thieves who might connive with others and kill our animals”, Mr. Muhesi said.

The Queen Elizabeth National Park Chief Conservation Warden, Pontius Ezuma, however, said the work of the Scouts would be voluntary. “Thenew initiative supplements the already existing methods like scare shooting and pistol bombing and we implore everyone to support the initiative”, Ezuma said.

A stray hippopotamus killed in Saluti B, Kasese Municipality

Another person has been found dead in the Queen Elizabeth National Park in Kasese district.

Fishers on Lake Edward in Kasese demand for an Independent Ministry